Pop an item and you will gain a spectral parasite. It will absorb the souls of everything you kill, as well as gaining unique modifiers for rare souls and thresholds. Once satisfied it will 'pop' into a large mob that will periodically summon souls of the slain. 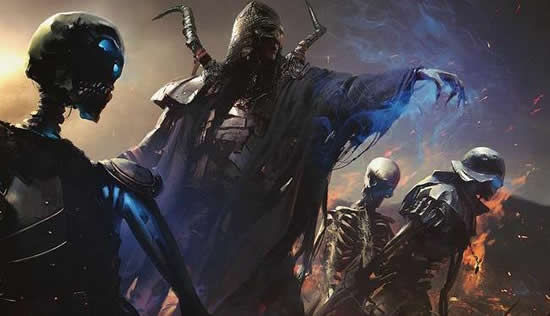 I would also love it to have some unique modifiers for bosses/uniques, so as to encourage people to actually kill map bosses for a chance at some nice stuff from their resident parasite.

In function I'm torn between making the parasite act like a leaguestone to prevent people just always having one on at all times or as normal. Ideally parasites would also come in different types with different weights like heavy ones that will always absorb a large amount of souls and light ones that will absorb a small amount but could roll well and turn into a nice punching bag despite the low count, for example.

The Harbingers are invading the planet in big pillar-ish "starships" that crash into the ground. When one lands, it releases a few waves of opponents in quick succession followed by a stronger wave. Defeating these causes the entrance to the vessel to open, after which you fight your way up the pillar ("sideways" - the Harbinger vessel has localized gravity).

In standard pillars, there is no centralized boss; reaching the bridge allows you to open some loot containers and view a plotted map of the world regions or Atlas locations where they plan to drop larger cruisers, which are layered more similarly to the Sceptre of God and have an actual boss at the top.

These cruiser drops happen at specific times, denoted with a timer; you must be in the map at that time for a Harbinger landing to occur. They occur pretty frequently (one somewhere on the Atlas every 5 to 10 minutes, one somewhere in each act every 10 minutes) but there is no way to predict their location outside of the Harbingers' plotted map.

Wreaclast has been overrun with wraiths that feed on your worst nightmares. Players randomly encounter wraiths that will fly towards them and send them into a dream state. In the dream state the area the player is in becomes dark and mobs start running at you from the corners of your screen, increasing over time, rares spawn after a certain time and there's a chance for a unique "dream eater" to spawn that can drop league specific uniques.

Staying within the dream zone would be extremely dangerous for players but offer them rewards if they're able to destroy the invading monsters and dream eaters. You can run to the edge of the dream zone to exit it.

Some dream zones (in higher tier zones) have specific mods that might make them more dangerous, more rewarding, harder to leave. These would be carried by the wraiths that posses you so you could see them in advance.

There are many interesting ideas, I will not list them one by one, I welcome your message about your unique ideas. If you need some PoE guide, visit https://www.u4gm.com/path-of-exile.

As the game continues to grow, the increasing complexity of the game combined with weak skills, obsolete items, clunky/outdated systems will lead to a higher rate of burnout and a less friendly game experience for new players.